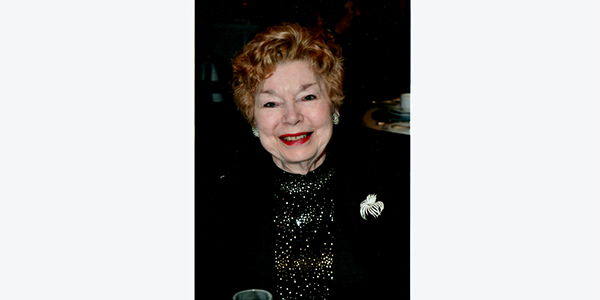 Education and the Arts

Mary Levin Cutler's relationship to the performing arts in Los Angeles began on her college campus of Cal State LA when Dorothy Chandler's "buck bag" was circulated to raise money for what would become The Music Center. "I belonged to a music fraternity, a college fraternity of women in music. We passed the buck bag to raise money for The Music Center." Mary's affinity for music outlasted her time at her alma matter, as she completed her bachelor's degree and went on to obtain her master's in music at USC, her years of study resting with the violin. "I've been a musician all my life, so you know it came to be something that was right."

While Mary no longer plays the violin, she made the transition to singing, using her gift by applying it to the niche world of opera judging. It was at one of these competitions that Jeri Gaile, director of The Music Center's Spotlight program, approached her about judging for Spotlight, a scholarship and arts training program for Southern California high school students. "I am a volunteer judge for Spotlight's classical voice category, and Spotlight is a wonderful program. There's nothing like on-stage performance." Mary has judged the Spotlight program for five years, generously giving her decades of experience to a new generation of performers.

Mary says, "I like the outreach The Music Center does in the community and to our young people and its efforts to educate them in the arts. I think it's something really necessary because our schools are not doing it. It's something that's fallen by the wayside, and I think that's too bad. So, The Music Center is at least attempting to fill the void, and I think that's wonderful."

Her values mirror that of The Music Center's, as her community outreach has helped to expand the knowledge and musical appreciation of kids in L.A.'s schools by way of her collection of "ethnic instruments." Her dedication to bringing sounds from around the world to the eyes and ears of elementary aged kids has opened her own eyes to the receptive and inquisitive nature of the children she educated. "I used to be invited into various schools to give little demonstrations on some of my ethnic instruments, which I called instruments from around the world, and, I must say, I was always surprised at how interested the kids were." The 144 instruments she once housed have all been donated to Cal State LA and will be exhibited in the near future.

With this gift to future generations, it comes as no surprise that Mary has left a bequest for The Music Center for education. Her generosity in life will be one to live through multiple musical generations, both with performers and young audiences alike. "I believe in education. We have to educate young people about supporting the arts, not necessarily to be performers, but to be the audience." Thanks to Mary, this wish will be fulfilled.